We synthesized a novel member of graphene family: decorated with zigzag interfaces, graphene plane turns into a stable uniform magnet. About 10% of carbon atoms bear spins, the rest of them participate in superexchange interactions. We introduce bulk magnetic graphene produced by a mature reproducible technology. Honeycomb sheets of carbon are covered with monoatomic stripes of covalently bonded fluorine atoms, running in crystallographic directions. This type of surface modifications resembles tabby kitty’s coat with tiger stripes or jaguar spots. Retention of pi-electron system results in quite different electronic properties of Tabby graphene compared to fully functionalized graphene derivatives, which are insulators.

”Zigzag” is the most intriguing magic word in the graphite/graphene world: a zigzag edge changes the electronic structure of the whole sheet causing a plethora of intriguing phenomena: electronic, optical, thermodynamic, and unconventional magnetism. All theories that we are aware of, predict an extended spin polarization along the graphene edges in the ground state, with opposite spin directions at opposite edges. For graphene society, “Zigzag Edge Magnetism” is essentially the same phenomenon as Santa Claus: (i) Everyone believes in it; (ii) Everyone expects generous gifts; (iii) deep inside everyone suspects it does not exist. At least there is no current evidence to say for definite whether Zigzag Edge Magnetism actually exists. While several experimental techniques provide insight into this problem, lack of direct evidence for the macroscopic magnetic moment formation hinders development of this nascent field. The reason is very simple: zigzag edge is very reactive and immediately becomes contaminated. Moreover, zigzag edges are energetically unstable and they undergo reconstruction via the so-called Stone-Wales transformations. 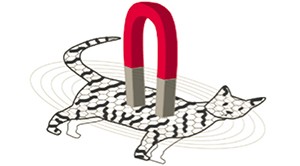 Whereas magnetism of graphene zigzag edges remains undetected, the novel graphene derivative is uniformly and strongly magnetic due to a dense network of zigzag interfaces on the basal plane. Fluorination by a presented method, rather than the breaking of the carbon-carbon bonds, is an efficient approach to create graphene nanoribbons and quantum dots. Direct measurements of macroscopic magnetism of zigzag edge states reveal the behaviour of low-dimensional magnetic quantum system, staring the rich and remarkable physics of strongly correlated graphene-based materials. The measured spin gap will allow a room-temperature on/off switching between the nonmagnetic and magnetic states in spintronic devices.

We created the peculiar zigzag edge states at interfaces by slow fluorination of graphite, which during the synthesis breaks down into graphenes. Fluorine is the most electronegative element in the Periodic table, and theory predicts that if a fluorine atom is attached to graphene, the next one will take a nearby position, but upside down. Experimentally this is realized in a very slow process, which provides quazi-equilibrium conditions: after the wet synthesis, the samples are kept in desiccators up to one year. If one thinks that this method has poor prospects to industry, one never tried red wine, cheese and cognac.

When we started our experiments, the idea was to synthesize embedded graphene nanoribbons. Zigzag graphene nanoribbon (ZGNR) is a pathway towards realizing the spintronics dream. The stoichiometry C4F yields 3 carbon atom wide nanoribbon, C3F is a 2 atom wide, and C2F produces monoatomic chains. Today in our samples the chains are oriented chaotically with average length of 8 atoms. That’s why we call this material Tabby.  Tabby graphene is luminescent, and the colour depends on the C/F ratio. Indeed, it contains confined islands of p-electron system, i.e. quantum dots.

It is easy to fully fluorinate graphite or graphene up to stoichiometry CF (Teflon). It takes lots of experience to obtain C2F but it requires much more expertise to get practically important C3F, C4F and less fluorinated samples with evenly distributed chains, without clustering and empty spaces.

The novel material will be utilized in many areas. Theorists have already designed spintronic devices where magnetic graphene works as a spin generator, and yes/no spin switching is done in a manner similar to that used in charge transistors. Second is magnetic medicine, which is in desperate need for biocompatible magnets. Third is the quantum dot area, where the dots are not nanoparticles but shine from large panels. Fourth, this material has proved to be valuable for the development of anodes in rechargeable post-lithium batteries. Quanum nature of low-dimensional graphene magnetism presupposes the future applications in high-temperature superconductivity and quantum computation.