LowD magnetism is not related to 2D lattices (on surfaces) or 2D electron gases (in quantum wells) or quantum dots.

Exchange interactions which lead to magnetic coupling are much stronger in one or two spatial directions than in the remaining ones.
Real materials are 3D but behave effectively as low-dimensional systems if the dominant exchange interactions are intra-chain (1D) or intra-planar (2D).

Interaction favors alignment of neighboring magnetic moments along a preferred direction, and thus lowers the energy of the system, making a negative contribution -J.

What about thermal fluctuations? kT ~ J

What about quantum fluctuations?

The interest in low-dimensional magnets developed into a field of its own because these materials provide: 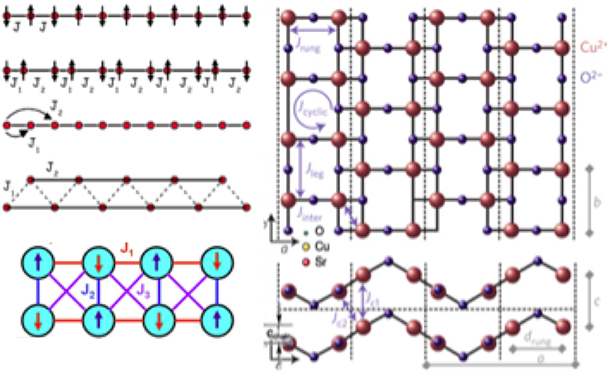 LowD magnetism can be traced back 90 years ago:

For the first 40 years LowD magnetism was an exclusively theoretical field.

‘At any non-zero temperature, a one- or two-dimensional isotropic spin-S Heisenberg model with finite-range exchange interaction can be neither ferromagnetic nor antiferromagnetic.’

World-wide progress in material design has provided a multitude of materials in which selected degrees of freedom like spins, orbitals, or charges are dispersing effectively only along one or two dimensions like in the spin-1/2 Heisenberg antiferromagnet chains (HAFC).