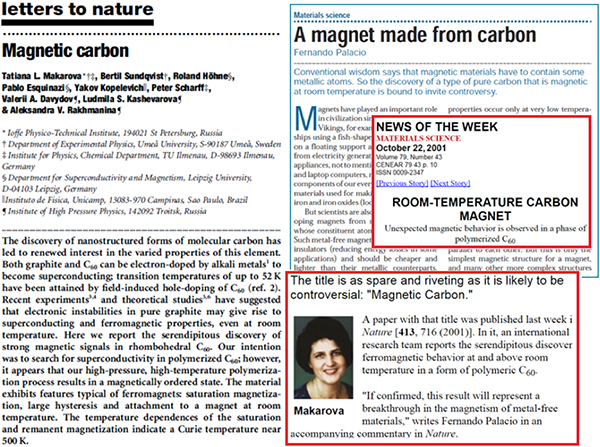 This publication stirred up the feelings of scientific community. On one hand, carbon cannot be magnetic, and magnetism apparently comes from metallic impuities. On another hand, it was the dam’s burst. The results on polymerized fullerenes were immediately repeated in several groups. Moreover, magnetism was found in many other carbon structures: graphite, nanographite, carbon nanofoam.

Some of these issues are still controversional, as writes Prof. Coey in the 2016 publication in Nature Physics “Collective magnetic response of CeO2 nanoparticles”, doi:10.1038/nphys3676:

The magnetism of nanoparticles and thin films of wide-bandgap oxides that include no magnetic cations is an unsolved puzzle. Progress has been hampered by both the irreproducibility of much of the experimental data, and the lack of any generally accepted theoretical explanation. The characteristic signature is a virtually anhysteretic, temperature-independent magnetization curve that saturates in an applied field that is several orders of magnitude greater than the magnetization. It would seem as if a tiny volume fraction, ≲0.1%, of the samples is magnetic and that the energy scale is unusually high for spin magnetism.

Breakthrough in the magnetism of metal-free materials

Another novel direction is formulated  “Formation of magnetic state through introducing nonmagnetic sp elements to nonmagnetic matrices”. The technology which today has become mature is creating of intrinsic magnetic defects by ion bombardment.

Some coauthors retracted the paper in 2006. Two authors, Tatiana Makarova and Peter Scharff, did not sign the retraction.

The words ”carbon” and ”magnetic” were already combined. Nothing could stop the new scientific direction.

Elsevier commissioned  the book “Carbon Based Magnetism”. Edited by T. Makarova and F. Palacio the book with the subtitle “Overview of the magnetism of metal-free compounds and materials” contaied both organic molecular magnetism and novel carbon magnetism. The book became a bestceller in Japan, where carbon magnetism has been quickly progressing.

Scientific community  did not accept the retraction of 2006. The work on magnetic polymerized fullerenes published in Nature in 2001 remains highly appreciated by the scientific community. The disctribution of charge and spin in polymerized fullerenes was chosen to the cover of Dekker Encyclopedia of Nanoscience and Nanotechnology, Second Edition (2007) and Third edition (2014). 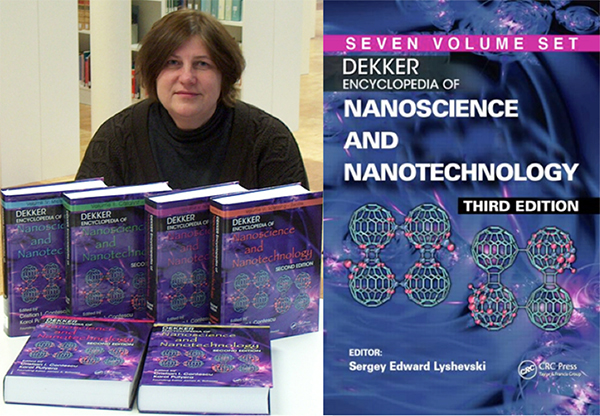 The EU FP7 project Nano_Guard 2011-2015 on the application of magnetic fullerenes in medicine was successfully fulfilled and chosen by the EU Commission  among the projects ”that made a splash”.  http://www.internationalinnovation.com/nanosolutions

MagNonMag culminated with the production of bulk magnetic carbon.