Three important issues need to be addressed in the discussion of graphene magnetism: (i) In one- or two-dimensional systems there will be no long range order of magnetic moments: continuous symmetries cannot be spontaneously broken at finite temperature (Mermin-Wagner) and even in the ground state (Coleman); (ii) magnetic properties are controlled by the type of the edge, (iii) magnetic properties are controlled by the bipartite graphene honeycomb structure.

where χDi and λi are known as Pascal constants and are tabulated.

However, if magnetic field is perpendicular to the planes, susceptibility is much greater χ⊥= – (22 – 50) * 10-6 emu/g. Such behaviour is related to aromaticity.

Thus, the magnetic susceptibility of carbon allotropes is very sensitive to the energy band structure. This means that their magnetic behaviour can be altered by modifying the band structure. Modification of band structure can be achieved by introducing topological defects or absorbed guest atoms to graphite. They can change the amount of localized electronic states, which will cause an increase in the density of π-states at the Fermi level and trigger anomalous behavior in magnetic field.

In nanographite the effects from different defects and edge states are noticeable. In order to describe its magnetic susceptibility, various sources of magnetic moment should be considered. Total magnetic moment of carbon materials χtotal can be found as the sum of different components:

Where χtotal is atomic core diamagnetism, χorb is orbital diamagnetism from itinerant π-electrons in band structure of a semimetal, χVV is van Vleck paramagnetism originating from virtual magnetic dipole transitions between the valence and conduction bands, χferro is ferromagnetic term from magnetic impurities, χLand is Landau diamagnetic contribution, χPauli is Pauli paramagnetic from conduction electrons, and χCW temperature-dependent Curie–Weiss term equal to C/(T−Ѳ), where C and Ѳ are the Curie constant and the Weiss temperature, respectively.

However, in the experiment it is practically impossible to distinguish all these contributions, and a simplified formulais used:

Exam questions for the students

The nature of defects is not discussed. It can be a vacancy of covalently attached atom. Both produce unpaired spins

In this case the nature of defects is important. Vacancies are excluded; they simply cut the graphene plane. Adatoms are excluded; they create two chains of spins. Quasi-one-dimensional carbon chains in fully hydrogenated graphene are depicted in Fig. 1c (Phys. Rev. B 2011, 83, 235408 ). Peierls instability is disregarded. To calculate magnetism, one needs the formula of AF coupled linear chains, S = ½ units, all J equal (Phys. Rev., 1964, 135). 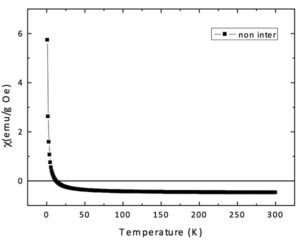 In Figure is plotted the magnetic susceptibility as a function of temperature.

To calculate the magnetic susceptibility of infinite graphene sheet with 1019 g-1 of interacting defects there are two possibilities:

The description of this kind of interaction is given by the Heisenberg Hamiltonian, from which it’s possible to calculate the component χdim of susceptibility.

I take the same absolute value for the exchange integral: 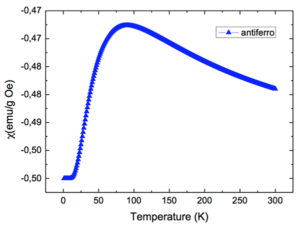 Considering the positive, single-J form of the Hamiltonian for the antiferromagnetic interaction,

Similarly, for the ferromagnetic interaction I obtain the susceptibility as a function of temperature by replacing the J-sign in the equation: 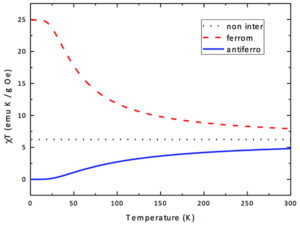 The plot for ferromagnetic-interacting spins is similar to the Curie-Weiss law. To be more sensitive to the presence of interactions, it is useful to use the “χT plot”, where χ = χtot – χdiam. Indeed, in case of non-interacting spins I obtain a costant value as a function of T, giving by the Curie’s costant C.

At high temperatures the product χT for the interacting spins numerically approach the value of the Curie constant.

To perform the calculation of the Magnetic Susceptibility (χ), I consider a quasi-one-dimensional carbon chains in fully hydrogenated graphene (Fig. 1). 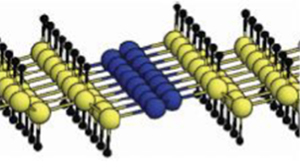 The parallel Magnetic Susceptibility (χ) is given by

In our particular case, the above formula can be written as a power series, up to the third order, and it becomes

where g=2.0023 is the Landé factor for electrons, μB the Bohr magneton, N=1019 the concentration of carbon atoms in the 1-D carbon chains, JkB⁄=100 ? the exchange interaction and kB the Boltzmann constant. The values of constants is: 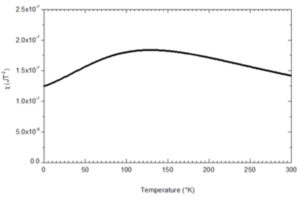 The values of the Magnetic Susceptibility (χ) as a function of temperature is shown in the graph (Fig. 2).

Fig. 2: Magnetic Susceptibility (χ) as a function of temperature 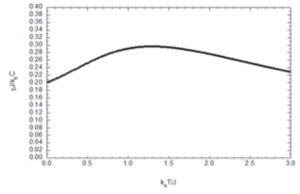 By appropriately rescale the x and y axes, we obtain the graph (Fig. 3).

Fig. 3: Magnetic Susceptibility (χ) as a function of temperature. Rescaled