Graphene is an exceptional candidate for spintronic applications. Several theoretical teams predicted spin valves, using intrinsic magnetism of graphene nanostructures and simulated the spin-polarized transistor carved from a single graphene sheet where magnetism is induced by the spin polarization of the edge states [8].The question of inducing magnetic ordering in graphene is of vital importance: the hope is to have tunable magnetism that could be changed by gating, doping or functionalization. We have demonstrated that graphene fluorination, rather than the breaking of the carbon-carbon bonds, can be used as an efficient approach to generate strongly correlated magnetic states in this remarkable material. The network of F chains confines a two-dimensional electron gas into ultra-narrow nanoribbons and quantum dots and induces a strong spin polarization with a mixed ferro- and antiferromagnetic coupling between locally emergent magnetic moments. Retention of p-electron system results in unique potential of Tabby graphene.

Atomic force microscopy and atomistic reconstruction of two samples: C2F and C3F. The samples contain regular isolated C and CF chains without clusters. F is red on left image, yellow on the right.

An attempt to make graphite magnetic with the help of fluorination was described by Manchester Nobel group. They confirmed that fluorine causes spin-half paramagnetism but did not find any signs of magnetic ordering and explained it by clusterization of fluorine atoms where only one spin was observed per cluster of ~2000 atoms. Our work has very strong differences. 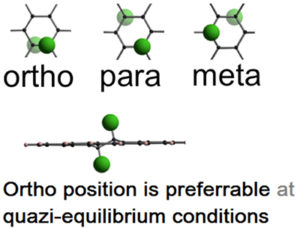 First, we use the obvious fact that fluorine has the highest electronegativity of all the elements. If the synthesis is made slowly at low temperature, quazi-equilibrium conditions allow fluorine to attach in the thermodynamically preferable places. Fluorinated carbon tends to spatially separate from non-fluorinated carbon. If one F is attached to graphene, the next F will most probably attach close to it, to another side in the ortho-position.
Why? The adsorption of an odd number of F atoms disturbs the p-electron system, so the adjacent atom attaches as close as possible but on another side due to strong repulsion. Meta-position is unfavourable because it creates two unpaired radicals.

Second, we control the attachment of fluorine by a nuclear magnetic resonance study (19 MAS NMR), X-ray photoemission spectroscopy (XPS) and angle-resolved near-edge X-ray absorption spectroscopy (NEXAS) [12,13] These methods have provided evidence of the sequential attachment of fluorine atoms to opposite sides of a graphene sheet and gave quantitative answer about the number of nearest neighbours. If one F atom attaches to graphene, it has 3 “naked” carbon atoms and zero CF neighbours. If the F atoms make clusters, they have 3 CF neighbours. In the case of chains, every atom has 2 CF neighbours, and the terminating atom has 1 neighbour. If we know the relative number of CF atoms with one or two CF neighbours, we calculate the average length of the chains.

Third, we use bilayer graphenes. The honeycomb lattice of graphene is a bipartite lattice. Sublattices A and B are identical in a single layer. In a bilayer, atom attachment on B is more energetically preferable than on A. This creates an additional discriminating mechanism leading to the formation of regular tabby patterns where crossing and branching are suppressed.