It is cold and dark yet the whole of Finland tries to keep green even in the winter. Green economy and green growth: what kind of associations do you have about this country apart from the darkness and silence?

Green growth of Finland and the role of Lappeenranta

The whole Finland economy is based on safe energy consumption, usage of natural materials in construction of buildings, close distance of living areas to lakes, healthy lifestyle of population and its participation in sports activities.  Since I study in Lappeenranta, I can describe the “green” activities in the South Karelia region.

This is what I noticed first when came to Finland: 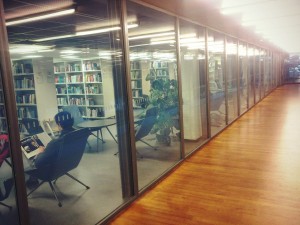 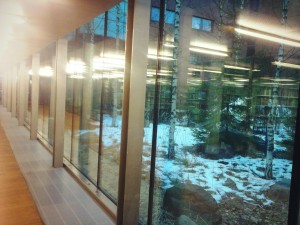 The glass corridor in the university (LUT), the library is on the left side and an inner garden is on the right side. In my opinion, it’s not only beautiful but also allows in the sunlight shining in the morning. 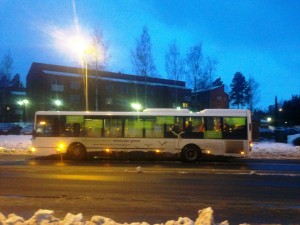 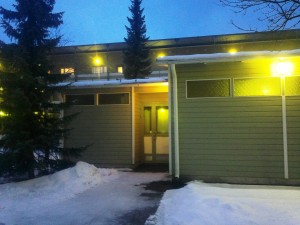 Left: Green advertisement of LUT 0n the local bus which calls for efficient energy consumption. It’s worthy to mention that in Lappeenranta, the production of eco-friendly transportation (buses, bikes and cars) with electrical engine has been launched.

Right: a typical Finnish indoor waste room and bike storage made of wood and surrounded by fir-trees. It’s definitely different from usual waste rooms in other cities. Affection to nature is visible in flats and houses as well; windows and inside doors are usually made of wood. Also most of buildings have automatic counters for heating system. These buildings are also comparatively new, they may not compete on a par with old European cities for the design but they definitely win in commodities. 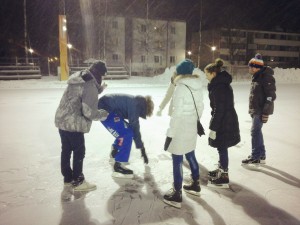 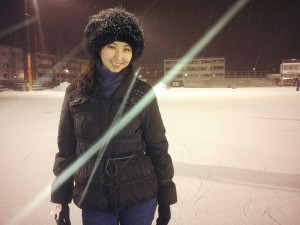 And when it’s snowy, cold and dark many ice rinks open their space for ice skating. For instance, this students’ ice-skating event is dedicated to celebration of Valentine ’s Day 2014. Each student received a heart signed with an index number and by that should have found its “heartmate”. 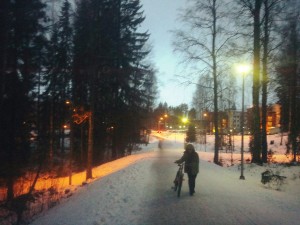 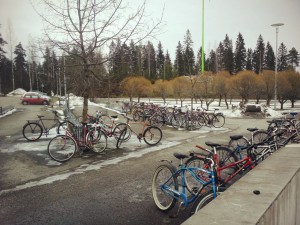 Evidence is everywhere: for instance, many people use bicycles even in the hard winter times. According to Finnish law, every bike rider should use light reflectors on the bike in the dark. It also concerns pedestrians who need to wear some light stripes.

Lappeenranta participates in competition that rewards the greenest city. According to statistical numbers, the city produces 90% of its energy from renewable resources. I know that solar panels and a wind station near the university supply parking places with electrical heating for cars and it’s going to be expanded to a big solar and wind park in Finland. Currently, they also own a weather station that forecasts the weather in different regions of Finland.

This is all maintained by Green Campus which has many green projects. Even the university elevators are extremely energy efficient. The campus even wants to install meters inside them to measure the exact energy they consume.

Finally, I really accosiate the country with bright green color from one hand and with dark colours from the other hand. Something about it I already described here.