Aisulu Harjula 28.2.2017 Culture, General No Comments on Top 10 Must Know Things About Finland

When I ask my Finnish friends to tell about national identities and explain local customs, they told: “Well, Finland is just a country, there is not much to tell about it”. I’ve been living in Finland for 3½ years, and I can tell a lot about Finland and its culture. First, if you name these 1o things you should know about Finland to them, you will definitely win their appreciation and smile! 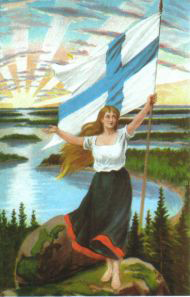 Finnish Maiden on a postmark in 1906 (from Wikipedia)

P.S. I was inspired to write this post by Tanja Karppinen who gives lectures on Finnish culture to LUT international newcomers =)